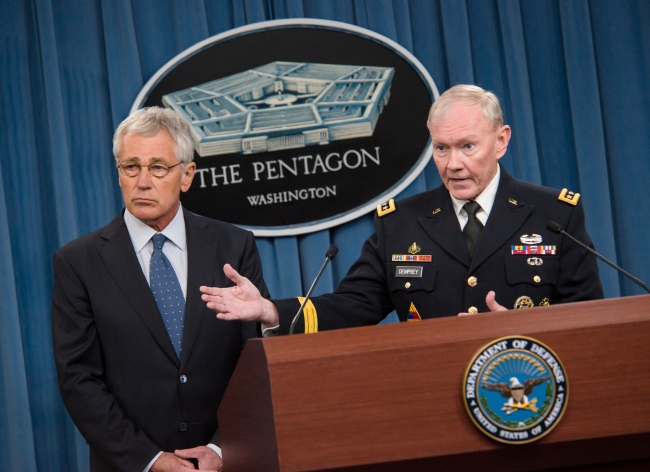 Revealed on Monday February 24th was the defense budget for FY 2015, and the headlines were about the cuts to manpower mostly in the army. Yet, the most important questions of what ought to be our major objectives, an examination of the global security landscape, and finally, the right tools to employ has been given too little attention.

Defense policy and resources should not be budget driven, nor driven by special interest congressionally or even by the desires of the various services, and certainly not by the military-industrial complex which so far has largely called the shots due to their influence over Congress and their massive lobby machine. We have for far too long given the “greedy” and self-interested the upper hand on posture and strategy over the smart, forward-looking, relevant and cost-conscious force.

First, what needs to be said is that Hagel and his budget people are right in that our military force numbers need and should come down to a more reasonable level. That may make room for a higher quality level, better trained, and more focused armed forces rather than a bloated and often bureaucratic structure that hurts flexibility, innovation, being adaptable with agility and leanness, and better integration across all the services. Personnel costs need to be observed, along with big useless hardware.

Yes, the new DOD budget may hopefully be an all-important shift in American military priorities. The New York Times’ Thom Shanker and Helene Cooper, state in their recent article “Defense Secretary Chuck Hagel plans to shrink the United States Army to its smallest force since before the WW II buildup and eliminate an entire class of Air Force attack jets in a new spending proposal that officials describe as the first Pentagon budget to aggressively push the military off the war footing adopted after the terror attacks of 2001…” And yes, this is a key move but not yet the last word in what will be a major budget fight.

Second, behind all this should be a hard and clear-eyed look forward into the strategic landscape and evolving trends that need either greater attention or at least more appropriate response—perhaps not military, but rather proactive tools that are far less costly than carelessly sending in the heavy amour and troops in areas of conflict, emerging unrest, or civil war, especially in areas that are not understood or so complex that military solutions create more problems than they solve.

What, then, are the questions that should inform our defense structure and deployment of resources, and are they worth the cost of the risks involved?

The first category is what I must call “existential high risks.” This includes above all the threat of nuclear weapons and other weapons of mass destruction (WMD). Here, we need to include the nuclear weapon states like Russia, China, Pakistan, India, North Korea, Israel, and possible incipient nuclear weapon states like Iran. Frankly, most of these states first require intensive diplomatic and intelligence efforts, rather than military might. War prevention, non-proliferation efforts, and confidence building and monitoring are among the key tools here, not military threats or action that could engulf the world in horrors beyond imagination. We need more resources here, not less, yet Congress, and let’s be frank, specifically the Republicans in Congress, want to add just those outrageously expensive weapons systems that have no or little role now or in the future and cut just those tools that address these first order threats with non-military tools that are appropriate and have often worked in the past. Military action against any state that has not normally stopped it from having nuclear weapons, but diplomacy and sanctions have.

Further, we and the Russians have massive nuclear weapons and stockpiles that threaten the existence of the entire globe and would be insane to ever use. Our most useful act of lowering our risks and preventing conflict is arms control measures, non-proliferation efforts, and building communities of security and peaceful cooperation on regional and global levels. Yet again, Congress seems to think we need more weapons or at least that we need to pour more and more billions into weapons that exist but are not relevant to the world today or in the future. They seem to wish to add mindlessly to them or “modernize” them when these programs are redundant and unnecessary, simply enriching the contractors in a variety of states.

The next order of priority are areas of MAJOR possible conflict that threaten America interests in a serious way or threaten to create major upheavals or conflict that can threaten a whole region of strategic interest to us and our allies. This includes the rise of China, and especially its nationalistic approach to disputed islands in the South China Sea and elsewhere. But also important are making sure that China’s rise is indeed peaceful and integrating China into the international community as a responsible and predictable state. Here, military efforts are not and should not be our main tools as they could provoke the opposite reaction than we seek, which would be in no one’s interest including China’s.

While it is appropriate to have a “pivot to Asia,” this should primarily be a diplomatic and economic effort, not military except to give to our friendly nations in the region a sense of security, thus, of common diplomatic war, avoiding cooperative purpose. While it requires some military resources, they do not have to be such to bust the key downward trend in military expenditure. The growing Chinese forces are now and into the foreseeable future but a fraction of our own strength, despite the efforts of our neocons and Chicago school hawks who blindly see China as a war threat, urging even more massive military and self-fulfilling counterproductive responses, reinforcing the right wing hawks in China.

Within this category is the possible conflict between India and Pakistan, both nuclear weapons states with long lasting antagonism. Here again, diplomacy, not military might, is urgently needed. The other area is the Middle East region and specifically, the Israeli-Palestinian issue, the Syria conflict that threatens the whole region, and the instability of Lebanon, Jordan, Turkey, Egypt and the regions of the Arab Spring. Again, some military effort exists here already, but the main tool must be diplomatic since finding common sense solutions of mutual security and reconciliation has to be the answer, rather than U.S. troops on the ground. I do not dismiss possible use of U.S. military or intelligence assets here in very careful and discrete ways to support multilateral effort, enforce peace, and deal with major humanitarian crises. But, this does not need F-35s, large tanks, bombers, or massive troop deployments verses peacekeeping and training. Solutions, in the end, must be made by political agreements and early efforts at mitigating conflicts. As the medical people say, “First, do no harm.”

The third area of priorities, which we have been focusing on to our cost this last decade and more, is terrorism, piracy, and related localized insurgencies and civil wars. Here, some military action is likely to persist as long as serious threats impinge upon U.S. security and that of our allies or key nations in which we have an important interest. But, we need to weigh a better “cost-benefit” assessment since too often our military actions have had a “blowback” effect which needs added attention.

The tools here are not massive deployment like the idiocy of Iraq which was unnecessary and ended only adding to terrorism in the region, but rather more careful intervention with others to prevent chaos and mass killing. These regions need serious efforts to address more fundamental economic and social decay problems, along with corruption and cruel authoritarian rule. Multilateral aid, education assistance, jobs, and means of upward mobility will do more than battalions of badly trained troops and planes dropping bombs carelessly. There will be times when we need Special Ops type of action, but they are not a panacea in place of development aid and helping social and political change. Thus, the troops that remain after the “quantitative” cuts need to be better supported, better prepared, and an adjunct of a larger strategy of dealing with underlying problems and contribute to long-term peaceful outcomes.

There are other areas where military activities are key, such as cyber-warfare and above all humanitarian intervention in cases of massive natural and other disasters, where their capabilities and training can be of immense help. This includes the quick introduction of medical assistance which often is lacking in many affected situations. The same goes for supporting peacekeeping efforts.

DOD will be again coming out with updates of posture statements, the CIA will be doing its regular “net” assessments. Not least, we hope the Department of State will again provide its multi-year assessment. With all of these it is up to the White House to set broad strategic and resource frameworks and priorities. The problems are our dysfunctional politics and flow of money into Congress, along with the greedy and myopic congresspersons who have the last budget vote and are more likely to have the last say than our citizens or our government leaders. Too bad they are not often motivated by serious reflection on American interests and risks or the desire for our engagement in the world to be really effective.

Finally, any deep examination of our strategic interests must include climate change and poverty since they are far more dangerous to the U.S. and our globe’s future than many of the other items we are spending so much money on.

Since the future is often not discernible, we need a more flexible and lean capability, rather than a massive and backward looking DOD. We need leaders of both vision and courage to see the trend and be moved more by the emerging facts and less on running the budget up for expensive toys that waste assets that can be better deployed.

2 thoughts on “DEFENSE BUDGET (NEW ONE IN THE WORKS, MAYBE) AND PERHAPS A REAL, MODERN, FORWARD LOOKING DEFENSE POSTURE?”