Welcome to Rethinking National Security’s Brexit Coverage page.  On this page, we will compile a variety of polls regarding the upcoming British referendum, quotes from leading politicians on both sides of the pond, as well as news and analysis pieces about the potential British vote to leave the EU.  Harry will be blogging his thoughts on the vote from London, which will be posted both here and on the main page of the blog.

The United Kingdom voted Thursday to leave the European Union, by a margin of 51.9% to 49.1%.  The vote is sure to have major short- and long-term consequences for both the UK and the European Union.  As seen in the map below, Scotland and Northern Ireland voted overwhelmingly for Remain while England (outside of London) and Wales voted to Leave. 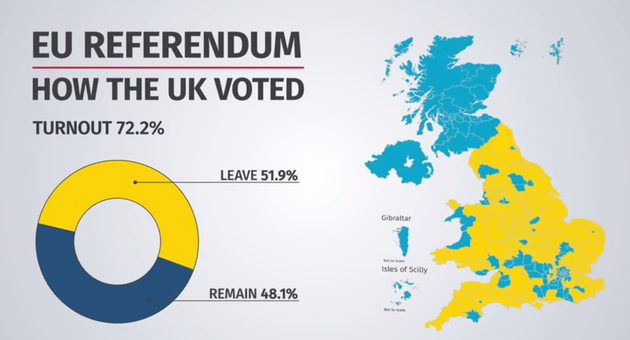 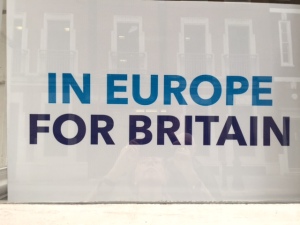 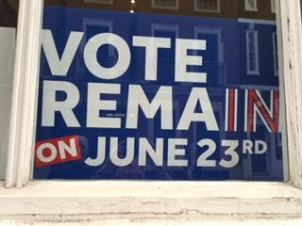 An Ipsos MORI poll released this morning (June 23) revealed that 52% support remain and 48% favor leave.  However, 12% have not fully made up their minds yet.  This poll also broke down which  issues were most important to voters.

Click here for the Financial Times‘ polling aggregates.  In this poll, Remain leads with 48-46 margin as of June 23, 2016, the day of the referendum.

Click here for Bloomberg’s Brexit Watch Indicators.  They give the Leave Campaign a 25% chance of victory in the referendum as of June 23, 2016, the day of the vote.

Click here for data from the Economist, which also allows you to break down the polling numbers by a variety of factors including geography, gender, and party affiliation.

Cameron to Step Down Wednesday, May to be PM (CNN)

The New Prime Minister Will be a Woman: The Field Narrows to Theresa May and Andrea Leadsome (USA Today)

Brexit could result in 80,000 financial jobs leaving London (The Independent)

The Pound continues to fall, even two weeks post-referendum (The Guardian)

What the Brexit means for NATO (New York Times)

Boris Johnson and the Years of a Clown (New York Times)

We’re Better than That:  What the Brexit Means for America (New York Times)

Cameron speaks about the Brexit (PBS)

Brexit walks back some of their biggest promises (Washington Post)

Regional and Demographic Analysis of the Vote (The Guardian)

LIVE COVERAGE by the Washington Post and the New York Times

The Daily 202:  Brexit Coverage and its implications for the US Election (Washington Post)

Editorial Board:  Britain Leaves on a Cry of Anger and Frustration (New York Times)

Cohen:  Brexit result is a leap into the dark (New York Times)

How to make sense of the Brexit Turmoil (FiveThirtyEight)

Populist Anger on Both Sides of the Atlantic (New York Times)

Britain just left.  These countries could be next (Washington Post)

Britain’s Referendum is a warning to America (Washington Post)

What does Brexit mean for the US Elections? (Washington Post)

Numbers to Know about the vote (FiveThirtyEight)

Brexit would be a disaster for Britain (LA Times)

Similarities between the Brexit Vote and US Campaign (Washington Post)

Why the Brexit vote should worry Trump (CNN)

Britain heads to the polls (CNN)

Brexit:  Should they stay or should they go? (CNN)

VIDEO:  James Corden on why Britain should remain (The Late Late Show with James Corden, CBS)

“It’s [NOT] the economy, stupid” – Why the Brexit has transcended economic politics (Washington Post)

VIDEO:  Why the Brexit is upsetting Wall Street (CNN)

After Brexit Vote, a Choice for Europe (New York Times)

Slovakian PM:  “Islam has no place in Slovakia” (Washington Post)

The Consequences of Brexit on the Baltics (Washington Post)

Debate:  The Consequences of a Brexit (New York Times)

NYT Editorial Board:  Nationalism and the Brexit

Jo Cox’s final article about why Britain should Remain (Metro)

What Brexit could mean for the Economy (FiveThirty Eight)

What Brexit could mean for Immigration (CNN)

The Role of Turkey in Pro-Brexit Rhetoric (New York Times)

Could the Norwegian Model Work for the UK? (Washington Post)

What would Brexit mean for NHS? (The Guardian)

Why Remain Could Win, Despite Recent Polling (The Telegraph)

What a Brexit Could Mean for Foreign Investment (CNBC)

How the NYSE Could React to a Brexit (CNN)

Market Uncertainty Could be Good for Remain (The Guardian) 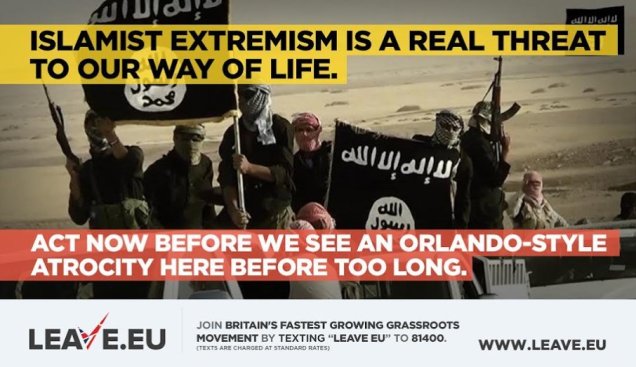 Gordon Brown:  Britain is a Leader, not a Leaver (Video) (Via LSE) 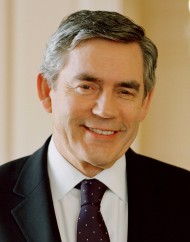 What has the EU done for science? (Nature)

Nature Editorial on the consequences of Brexit

A BREXIT VOTE OF GLOBAL CONSEQUENCES: ITS MORE CHAOS AND DISUNITY

HOUR OF DECISION – WILL HATE AND FEAR OR HOPE AND UNITY SURVIVE THE BRITISH VOTE ON ITS FUTURE?

LEAVING THE E.U. WOULD BE FOOLHARDY FOR BRITAIN

OUR AGE OF DISCONTENT AND ITS PERILS